An informative conversation about Drawing

This wonderful sculpture over the doorway of McNeal Hall on the University of Minnesota campus always spoke to me as she hid under the vines of summer. She was part of a series based on the relationship of architectural sculpture to the building it inhabits and its meaning to the surrounding community.

I’ve worked a bit more on a drawing depicting architectural sculpture at the University of MN.

This was part of a series completed to demonstrate the importance of such sculpture to the people within surrounding communities. Our sense of heritage, humanity, and belief system is reflected in these forms.

I just needed to brighten my day and hopefully yours by adding this colored pencil of flowers at the Como Conservatory in St Paul, MN. The colors were amazing!

These are two colored pencil drawings from a larger series based on a sculpture of the goddess Persephone, I had portrayed her in the different seasons and these two show her in the sharp cold light of late spring.

I recently posted three floral contours to be completed with the textural gradations of stippling, hatching , and scribble. Here is the first comprised of clusters of stipple marks that create dot like effects to support the contour. It is a time consuming, detail oriented endeavor, yet can also be completed in a looser more painterly manner. 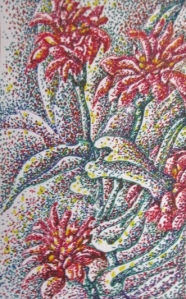 Finished Stage of The Pileated Woodpecker

I haven’t posted for awhile, but finally am finishing the drawing of a Pileated Woodpecker feasting on bugs from a dead tree stump.  The last stage involved watercolor washes to support the line drawing or the contour.  This stage shows gradations of colored pencil to provide a more subtle clarity to the picture and some pen & ink to allow for more drama.  It is a riot of color now as the orange leaves swirl about the bird.  I am working with this type of mixed media to spur me towards a more free approach.  I still have a ways to go!!  Any advise or input would be welcomed!

This is one of my first attempts at pairing watercolor with colored pencil of a tall sunflower past it’s prime.

Watercolor Washes for the Pileated Woodpecker

This is the next stage as I finally get to laying in the watercolor washes for the pileated woodpecker.  It was seen in my daughter and son in law’s yard feeding on insects from a dead tree stump.  I will add colored pencil

as the final step to give greater depth, nuances, and hue to the contour with washes.  I’m hoping that this combination will allow my drawing to become more free.  I see it is still a work in process!!

You are currently browsing entries tagged with Color Gradations at Dr. Mary McNaughton and Drawing.